Why Do I Get Dizzy What Is Vertigo

Why Do I Get Dizzy What Is Vertigo

According to American Family Physician, dizziness can be broken down into four main categories:  disequilibrium, presyncope, or lightheadedness, and vertigo.

Disequilibrium is a feeling of being “off balance” or wobbly; presyncope is a feeling of losing control of your body or blacking out; and lightheadedness is described as feeling disconnected from your environment., though descriptions are generally very vague.

Vertigo is described as experiencing “false sense of motion, possibly a spinning sensation.” Vertigo is present in several diseases, including Meniere’s (fluid in the inner ear), vestibular neuritis (virus attacking the vestibular nerve), labyrthnthitis (infection of the labrythin organs), benign paroxysmal positional vertigo, and migrainous vertigo (patient has migraine with vertigo). These are just some of the diagnoses, but what about the cause of vertigo?

In order to understand the cause we must first learn a little anatomy.

Did you know that your inner ear is not only responsible for converting sound from the outer ear into electrochemical impulses, but also maintaining balance via the vestibular system? 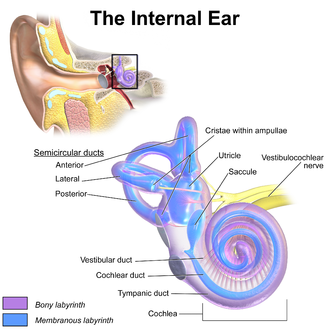 DIAGRAM OF THE INNER ORGANS OF THE EAR.

This vestibular system together with the cochlea (hearing) makes it possible for the body to know when it is rotating or accelerating in a linear direction. The vestibular system sends most of the information to the part of the brain that controls eye movement and to the muscles that keep an you upright. It is important for the body to maintain a sense of balance and spatial orientation at all times.

If you close your eyes you can tell where your hands are in relation to the rest of your body and where they are in space. You  can also tell whether you are sitting up straight (hopefully) or whether your feet are planted on the ground.

Now, do an experiment. With your eyes closed, raise both your hands and without touching your hands move them around in a fluid manner such that they almost touch each other, but not quite. This ability to know where you are in space due in part to proprioceptive nerves that are located in inside muscles, tendons, and joint capsules. Proprioception, considered our “sixth sense,” allows you to walk in a pitch black room without losing your balance.

In one of Oliver Sacks’s (famous neurologist) case reports, a young lady who lost her proprioception due to an infection of the spinal cord could not move properly or control her tone of voice (voice modulation is primarily proprioceptive). She later learned how to walk and to speak to the best of her ability by using sight (that is, by watching her feet), and by relying on her inner ear for movement and hearing for voice modulation. She still had issues picking up items and holding them too tightly because she was afraid of dropping things.

Proprioception, the vestibular system, and the cerebellum are keys to our sense of spatial awareness. Intoxication affects the cerebellum to the point that field sobriety tests are one of the best ways to tell if you’ve had too much to drink. Alcohol impairs your cerebellum thus reducing your ability to do fine motor movements and maintaining balance. If you cant walk a straight line you shouldn’t be driving.

Most of your proprioception is located in your hands and you guessed it–your neck. Rotation, extension, and flexion of the neck causes firing of proprioceptive nerves and allows your eyes and body to adapt to the new position. If there is injury to the neck, especially to the top of the spine where part of the brainstem is housed, a structural shift in the spine may occur that leads to neurological issues. It’s important that the body has a good sense of self and if that ability is impaired in any way, many health issues can arise,

including vertigo. If you suffer from vertigo, consider getting checked by a professional who specializes in upper cervical chiropractic care. They can assess whether you have an injury at the top of the spine, and if so whether is can be corrected.

One of the first things our vertigo patients notice after their correction is a “draining of the ear.” Often times not only are the proprioceptive nerves affected due to an upper neck injury but there is also compression on the various nerves, arteries, veins, and the tube that drains the inner ear (Eustachian tube) as well. After an upper cervical correction, the Eustachian tube can open up to allow the fluid to drain. This “draining feeling” can happen in a matter of hours, and we’ve had patients drain overnight and sometimes for several days.

Below are some interesting first hand experiences with patients who suffered from vertigo and received a correction at the top of the neck.